How to delete a building block

The first approach is an automatic deletion process as described in the The automatic way section.

As a second solution you can also manually delete each building block. You have more control with this deletion process. This is described in The manual way.

The following 3 steps will delete your building block.

First figure out the details about your building block you would like to delete. With the following mkactl command we can find out the exact name and the version of the building block.

Use the mkactl command to get an overview of your building blocks.

To delete a building block you can proceed with the following steps :

Let's assume you have your kubernetes configuration in the default location check your deployed Building Block(s) with the following command sequence.

Now we would like to delete the syseleven-kube-prometheus-stack from our cluster.

in our example it would be :

You should see the following process.

You have successfully deleted your Building Block from your metakube cluster.

Here we have an example of 2 Building Blocks, kube-prometheus-stack and elasticsearch, in our .gitlab-ci.yml.

Check out the .gitlab-ci.yml or alternatively you can use the gitlab editor as shown in the picture below. 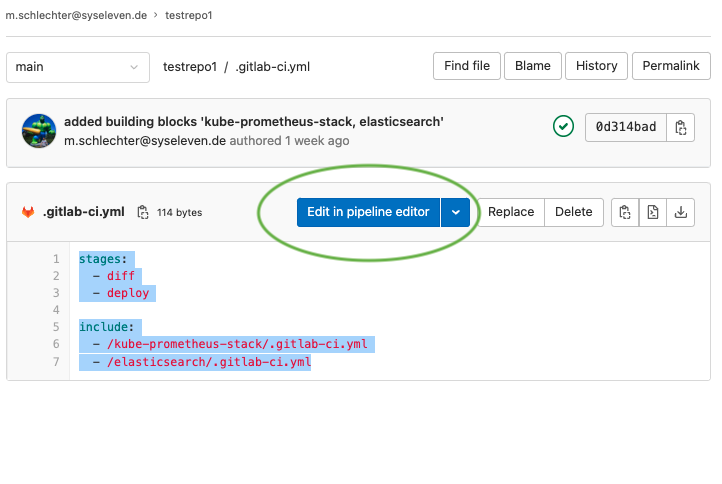 You can delete the corresponding line or comment it by putting a # in front of the deleted building block. The deployment information for this deactivated or deleted building block still resides in your control repo.
This can ba mandatory as in regulated environment an audit can request a redeployment within a certain timeframe e.g 6 month recoverability requirement.